Manifest Your Reality in 7 Days

Skip the pitfalls most make with affirmations preventing them from seeing real change.

Learn to manifest your new destiny in just 7 days with these powerful follow-along exercises.

And do it entirely free.

You’re probably familiar with the term you are what you eat.

Affirmations are our mental and spiritual variation of this advice. What we think, we become. Reframing our mental attitude has a powerful knock-on effect to change our actions and behaviors in real, meaningful ways.

This is probably one of the biggest impacts of anything we talk about here on Get Spiritual and it requires so little time to do.

So, if they’re so powerful, why doesn’t everyone do affirmations all the time?

The problem with affirmations is most people make some serious mistakes when using them. They can be so incredibly powerful but people often quit before seeing any real results (and it really doesn’t take that long).

If you want to really shift your reality then let us hold your hand and guide you through using affirmations to bring positive change to any aspect of your life. 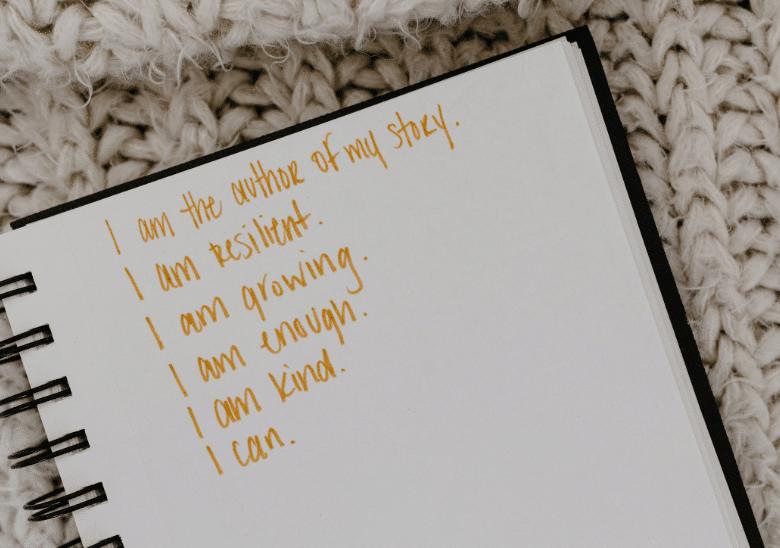 What Is an Affirmation?

What you think, you become. What you feel, you attract. What you imagine, you create. – Buddha

Repeated again and again to reprogram our thoughts, behavior and the reality around us.

People argue over the finer details and definitions but when you boil it right down they’re simply statements. There is some absurd power in their simplicity, however.

While this is a site on spirituality work there is now a pile of scientific data telling us positive affirmations work.

Some simply believe that these constantly positive self-statements are a way of changing our own subsequent behavior patterns and that is why they work.

Maybe the truth is somewhere between the two.

Whatever the reason, affirmations work. They’re an easy-to-use and powerful tool we can use in pretty much any aspect of our life. From the personal to the professional, affirmations can take us from wishful thinking to reality.

Perhaps one of the best parts? You don’t need to take my word for it. In under three minutes, you could employ affirmations into your daily life and see for yourself. In fact, I highly suggest you do.

What Are Examples of Affirmations?

Affirmations can be as varied as the people using them. Sometimes they’re super specific and sometimes they can be pretty broad.

You can keep it as simple as:

Or make it more specific towards a certain goal, such as:

How to Use Affirmations to Transform Your Life

One of the reasons most people who start using affirmations quit before they see results is they don’t use them properly.

Affirmations are simple and have some easy-to-follow rules. Sometimes it’s just a case of misunderstanding these rules. Sometimes someone deliberately tries to over-complicate things in order to sell you something.

You can absolutely tweak things to suit you, but some general rules:

I (personally) believe in achievable affirmation statements. An example of a positive affirmation might be I will win the lottery but while that’s positive, the odds are still very much against you. Affirmations are powerful but the smarter we are with them, the better they’ll work.

Instead, I’d use an affirmation like my finances will improve.

The action of actually using an affirmation will vary.

Some will simply repeat a few affirmations to themselves as they start their day (yes, it really can be that simple) while others will take things further with an affirmation exercise or a manifestation box.

What is the Most Powerful Affirmation?

You will absolutely find people making claims like this on social media. The idea that there’s some magical sequence of words that will make affirmations immediately better.

Don’t get me wrong. There’s a whole bunch of things you can do to make them more potent but one of the most important rules is affirmations are always subjective.

There’s no such thing as the ‘most powerful affirmation’.

What works well for you, might not work for me. Your affirmation exercises should be personally sculpted to suit you and this really doesn’t take that much effort. Don’t blindly copy something you see someone else do.

Trust me, the couple of minutes of work is worth the effort.

How Many Affirmations Should I Say in a Day?

Again, this will be at least partly individual and really depends on what your goals are at the moment. To get the most out of your affirmations I would stick to no more than 10 affirmations a day.

Limit yourself to a couple of minutes each session no more than once or twice a day. You really don’t need anything more than that.

You’ll notice many of our affirmation examples have 30+ examples but I do not recommend using every single one. Take the ones which suit you and go from there.

You will 100% find people who disagree with me on this. Some say you should spend no more than 60 seconds while others say you need to spend hours a day to see noticeable results.

I don’t presume to tell you what to believe. I do work with a lot of people using affirmations however and I share what I see working in their lives and my own. Affirmations really don’t have to be that complicated to make a real impact on your life.

60 Affirmations for Entrepreneurs To Drive Victory

67 Daily Affirmations for Self-esteem and Confidence

24 Reality Bending Affirmations for Women (and How to Use Them)

25 Empowering Crown Chakra Affirmations (and How to Use Them)